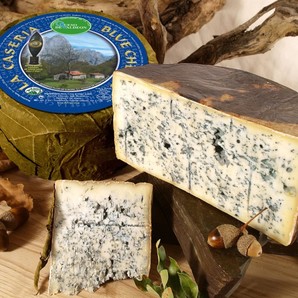 Valdeon, a hearty blue made with a blend of pasteurized cow and goat milk, is produced by a company called La Caseria in the province of Leon, Spain. Often overshadowed by its famous relative, Cabrales, Valdeon proves noteworthy and deserving of attention. Carefully wrapped in giant sycamore leaves, this beautiful cheese is aged for a minimum of two months in caves nestled throughout the mountainous landscape of the region.

Aromas of damp earth, tobacco and vanilla emerge as the wheel is released from its leafy package. Valdeon has very little of the biting spice found in Cabrales. Hints of chocolate, roasted meats and crusty baked bread roll over the palate in every creamy mouthful. The dense, inky blue veining darts throughout the paste, making each bite as rich and intriguing as the last.