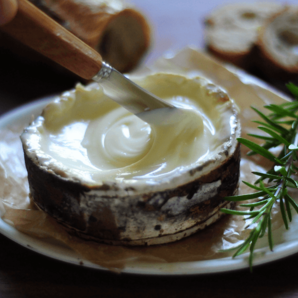 In the mid-1990s, two couples -- Mike and Carol Gingrich and Dan and Jeanne Patenaude -- bought a farm in the Uplands area of Wisconsin, an expanse of rolling hills and valleys that were left untouched by the Ice Age glaciers. The families grazed their mixed herd of cows seasonally on beautiful fields of grasses, legumes and herbs, and soon began to realize that the milk their herd produced was exceptional and likely perfect for cheesemaking. In 2013, Uplands' founders sold the farm to the next generation -- cheesemaker Andy Hatch, herdsman Scott Mericka and their families -- helping to ensure the farm's future.

Inspired by Vacherin Mont d'Or, Andy wanted to make a seasonal cheese that reflected the region's terroir. He tailored the Mont d'Or process to the farm's own milk supply and ripening environments, and created a soft, raw cow's milk cheese made from the rich milk that the herd gives in the fall. The wheels, which are washed as they ripen, are wrapped in thin strips of spruce bark. The beefy paste is luscious and silky and best eaten with a spoon.