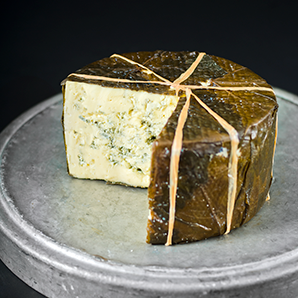 Rogue Creamery's cheesemaking roots date back to the 1930s when Tom Vella, founder of the Vella Cheese Factory in Sonoma, California, opened a creamery in Southern Oregon in the middle of the depression. The creamery created a wealth of jobs for the area, and soon came to focus almost exclusively on making blue cheese. In the early 2000s, Tom's son, Ig, sold Rogue Creamery to David Gremmels and Cary Bryant, who continue to uphold the practices and principles of artisan cheesemaking as set out by the Vellas.

Rogue River Blue is made only during autumn, when the cow's rich milk lends itself best to making this exquisite cheese. This cheese is wrapped in grape leaves that have been soaked in pear brandy. The blue veining lends hints of hazelnuts and fruit, and the paste becomes slightly crystallized as it ages. Rogue River Blue gained international recognition in 2003, when it bested European titans such as Roquefort and Stilton at the World Cheese Awards in London. Though now made from pasteurized milk, it later became the first American raw milk cheese to be exported to Europe.