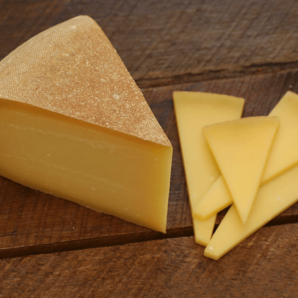 In the mid-1990s, two couples -- Mike and Carol Gingrich and Dan and Jeanne Patenaude -- bought a farm in the Uplands area of Wisconsin, an expanse of rolling hills and valleys that were left untouched by the Ice Age glaciers. The families grazed their mixed herd of cows seasonally on beautiful fields of grasses, legumes and herbs, and soon began to realize that the milk their herd produced was exceptional and likely perfect for cheesemaking. In 2013, Uplands' founders sold the farm to the next generation -- cheesemaker Andy Hatch, herdsman Scott Mericka and their families -- helping to ensure the farm's future.

Uplands' first cheese, Pleasant Ridge Reserve, shows how truly amazing artisanal American cheese can be. Loosely based on the French Beaufort, which is also made from grass-fed milk, Pleasant Ridge is rich and hearty with complex layers of caramel and nuts and an intriguing tart fruitiness. It won Best in Show at the American Cheese Society's annual competition in 2001, 2005 and 2010.