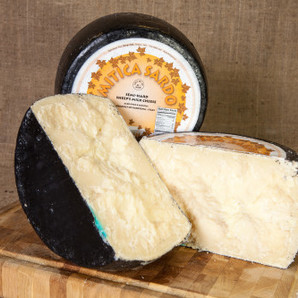 Sardinia is an island of savage beauty and violent contradictions. The island's hard and barren interior is surrounded by a green and lush coast. Cheeses that are produced in this hot and dry atmosphere differ greatly from Italian cheeses produced in the cooler northern reaches.

With a paste more golden than is usually found in sheep milk cheese, Fiore Sardo is banded by a hard, black, natural rind. This semi-hard cheese is sharp and savory and the slightest shavings of it brings simple, olive oil-dressed pasta alive. Fiore Sardo was awarded D.O.P. status in 1996.