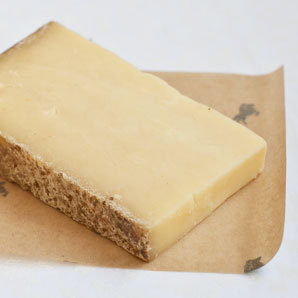 Fiscalini Cheese Company has made important contributions to the art of cheesemaking in California. The family dairy was first established in Modesto in 1914 and is now overseen by John Fiscalini, grandson of John Baptiste Fiscalini, the original proprietor of the farm.

After nearly a century of dairying, the family diversified the operation and expanded into cheesemaking. They began making their first cheese in 2001 after hiring master cheddar maker, Mariano Gonzales, to direct the development of an English-style bandage-wrapped cheddar on the farm.

The Fiscalini Bandage-Wrapped Cheddar is made with the milk of the dairy's own herd of Holstein cows. Within eight short hours of milking, the sweet milk is transported across the farm to the cheddar vats that churn out Mariano's award winning cheese. Carefully wrapped in traditional cheese cloth and hand-turned for the first few months of its life, this cheddar has a dense, almost chewy texture that melts sumptuously on your tongue. The flavors encompass intensely savory notes of charred meat, roasted peanuts and smoke with a pleasant whisper of tropical fruits. Bright and inviting, this domestic cheddar has given, and will continue to give, traditional English cheddars a run for their money.