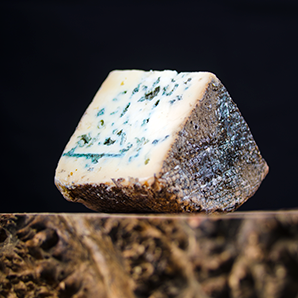 In 2002, Cary Bryant and David Gremmels purchased Rogue Creamery from the Vella family. Rogue's cheesemaking roots date back to the 1930s when Tom Vella, founder of the Vella Cheese Factory in Sonoma, California, opened a facility in Southern Oregon in the midst of the Depression. Cary and David learned the craft of making great blue cheese from Tom's son, Ig, and dove head first into rebuilding the crumbling infrastructure of the cheese house and retail store. They now buy milk from two local dairies and have recently purchased their own dairy and herd of Brown Swiss and Holstein cows to make their fine collection of artisan cheeses.

Now certified organic, Caveman Blue is a fruity, dense blue with hints of vanilla and a texture full of butter and crystals. It is aged "in the domain of the cavemen" about a year and has a natural rind. Caveman pairs well with big red wines like Zinfandels, Cabernets and Port, and strong beers like stouts or barleywines.