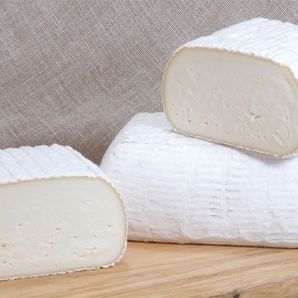 Caseficio Quattro Portoni is originally a family cattle company that transitioned into a water buffalo dairy and cheesemaking facility in the early 2000s. Located in the Bergamo province of Italy, the farm turned to water buffalo as a way to preserve traditional cheesemaking practices that had been present as far back as the 7th Century when the species was first introduced to the country. Breaking free from convention, the cheesemakers decided not just to settle for the omnipresent mozzarella that water buffalo are renowned for. Quattro Portoni now makes an array of cheeses ranging from fresh ricotta to blue.

Casatica, a buffalo milk cheese, is similar to Stracchino. A soft-ripened cheese, aged for three to five weeks, it has a supple richness. With a creamy interior and a mild and delicate milky sweetness, left to sit, it will virtually ooze on your plate and melt into your mouth.