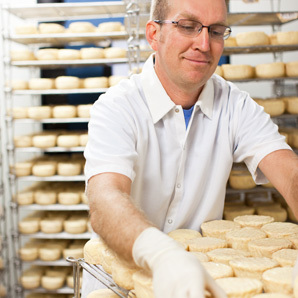 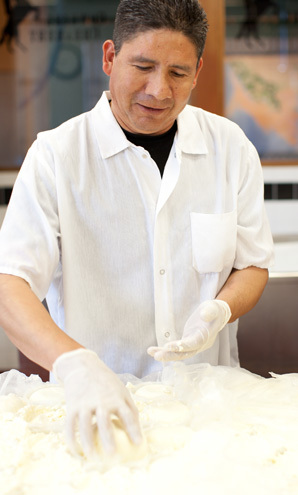 Lead Cheesemaker, Cowgirl Creamery
After finishing the AgroEcology program at U.C. Santa Cruz, Eric became an organic vegetable farmer in the Sierra foothills and Capay Valley. He got some dairy goats as a hobby, and when the herd kept growing and the milk kept flowing, he taught himself to make feta and chevre. Eventually, dairy trumped vegetables; he joined Cowgirl in 2002 to pursue his passion and expand his skills. He is constantly working to figure out new techniques and systems that make the creamery more efficient but retain the handmade qualities of Cowgirl’s cheeses.

Cheesemaker, Cowgirl Creamery
Miguel came to Cowgirl when he learned that the Dairy where he lived and worked for seventeen years would be selling their land to the National Parks. His job had been a peaceful one – herding cows on that beautiful land – but now he’s fulfilling the cheesemaking dream that began when he was 13 in his native Guadalajara. He has five daughters and one son.  His wonderful wife, Augustina, works in the kitchen at the Cantina in our Point Reyes location and his daughter, Erica, can be found at the cheese counter guiding customers on cheese tasting and selection.