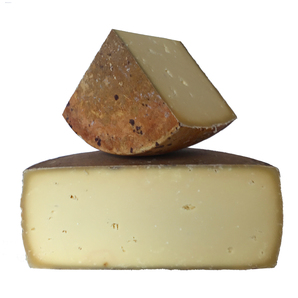 Almnäs Bruk is an 8,800-acre farm in Sweden founded by monks in 1225. Cheesemaking was discontinued at the estate after World War II and the farm began selling its milk on the commodity market. As milk prices grew increasingly volatile, cheesemaking was reintroduced at the farm in 2008. The original cheesemaker, Hans Stiller, who was 82 years old at this point, spearheaded the revival of cheesemaking at Almnäs, and converted the estate’s former distillery into a farmstead dairy.

Wrångebäck is Alpine-style in nature and offers sweet notes of mascarpone and toffee undercut by a zingy acidity. It has a firm, slightly crystalline texture that is reminiscent of an aged cheddar.