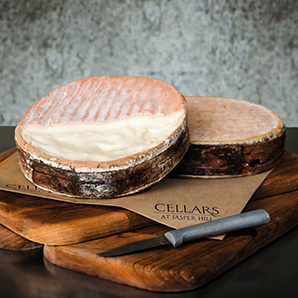 In the mid-2000s, after considerable research and investment, the Kehlers built the Cellars at Jasper Hill, a series of aging tunnels built into the farm's hillside that are carefully designed to maintain the specific climates and temperatures necessary for ripening different types of cheese. The Kehlers collect young wheels from neighboring farms and meticulously care for them in the Cellars, alongside the cheeses made at their farm. In the Cellars, this last stage of cheesemaking, known as "affinage,” is masterfully executed.

Developed by Mateo Kehler to showcase the rich, high-fat, high-protein winter's milk of the farm’s Ayrshire cows, Winnimere, which won the American Cheese Society's Best in Show in 2013, is rimmed in spruce bark and washed in brine as it ripens. The spoonable cheese offers an amazing range of flavors, from smoky bacon to mustard to fruit. To serve, peel away the top rind and let the bark form a bowl for the paste within.