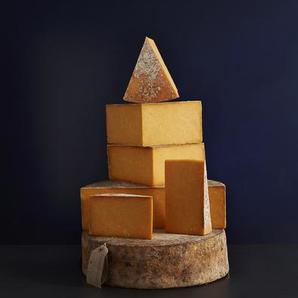 In 2005, husband and wife David and Jo Clarke decided to revisit a lost art in cheesemaking -- traditional Red Leicester. Leicester dates back to the 1700s, but much of the traditional production went by the wayside with the development of industrial cheesemaking systems and governmental rationing during World War II. Sparkenhoe Red Leicester, originally made by George Chapman, ceased production in 1875 when it was deemed fiscally unsound for the farm. The Clarkes, with generations of farming history in their lineage, have since resumed cheesemaking on the original Sparkenhoe Farm with their herd of 150 Holstein cows. The resulting cheese, with a stunning orange interior and rich flavor profile, demonstrates both the quality and staying power of historical recipes and practices in the cheese industry.

Wrapped in cloth as it ages, Sparkenhoe Red Leicester offers an earthy aroma up front. A bright note of acidity lands first on the palate and is followed with deeper hints of beef broth and smoke. The texture starts off dense and toothsome, and dissolves to a luxurious whisper.