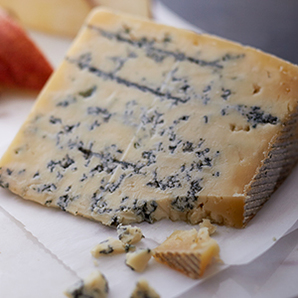 Bay Blue is the family’s newest cheese, a rustic blue with a thin natural rind and a dense, fudgy texture that smacks of Stilton. Its blue-green veins offer balanced flavors of fruit and nuts, while the buttery paste has a sweet, caramel finish. Bay Blue is perfect on a burger or stirred into a rich risotto, or as an after-dinner cheese course alongside a glass of Port, a few sliced pears or a handful of dried figs.