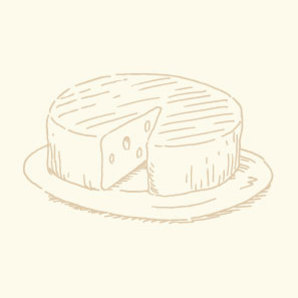 In 2002, Cary Bryant and David Gremmels purchased Rogue Creamery from the Vella family. Rogue's cheesemaking roots date back to the 1930s when Tom Vella, founder of the Vella Cheese Factory in Sonoma, California, opened a facility in Southern Oregon in the midst of the Depression. Cary and David learned the craft of making great blue cheese from Tom's son, Ig, and dove head first into rebuilding the crumbling infrastructure of the cheese house and retail store. They now buy milk from two local dairies and have recently purchased their own dairy and herd of Brown Swiss and Holstein cows to make their fine collection of artisan cheeses.

Mount Mazama is cheddar made from a blend of cow's and goat's milk. It is aged for a minimum of one year during which it develops a thick, slightly crumbly texture with small crystals throughout the paste. Notes of caramel are accompanied by flavors of sweet cream, and balanced by some acidity from the goat’s milk. Mount Mazama pairs well with a sparkling white wine or a crisp lager.