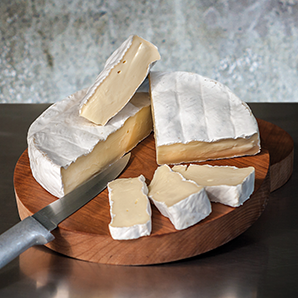 In the mid-2000s, after considerable research and investment, the Kehlers built the Cellars at Jasper Hill, a series of aging tunnels built into the farm's hillside that are carefully designed to maintain the specific climates and temperatures necessary for ripening different types of cheese. The Kehlers collect young wheels from neighboring farms and meticulously care for them in Cellars, alongside the cheeses made at their farm. In the Cellars, this last stage of cheesemaking, known as "affinage,” is masterfully executed.

Inspired by French Brie, Moses Sleeper is named for a Revolutionary War scout who was killed while helping to defend Vermont's Northeast Kingdom. The cheese has a thin bloomy-rind and a soft, milky core that offers an array of flavors at peak ripeness: cauliflower, crème fraîche and toasted nuts.