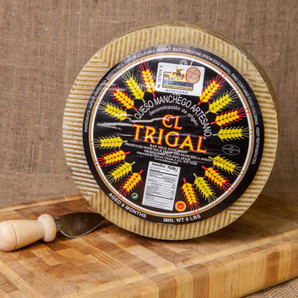 When paging though Cervantes' work of a man who jousts with windmills and tries vainly to prove that chivalry is not dead, did you find yourself craving cheese? It's no small wonder since cheese is mentioned in Don Quixote no less than thirteen times. Wondering where these quixotic wanderings are going? Well, La Mancha -- the land of Don Quixote -- is also the land of Manchego.

A refreshingly simple and laid-back offering in a world of so many complex cheeses, Manchego is Spain's most popular cheese. Wrapped snuggly in a recognizable wax rind, this raw sheep milk cheese is aged for eight months and develops a salty, briny flavor that marries well with a variety of accompaniments, quince paste being the traditional pairing.