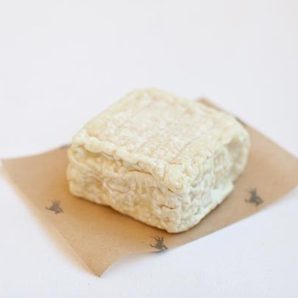 Tamara Hicks and David Jablons have spent several years restoring their 160-acre farm property in Tomales, California. In 2007, they opened their own goat and sheep dairy, in recognition of the land’s previous incarnation as a cow dairy. The farm, which is certified humane and animal welfare approved, currently keeps about 200 goats and 100 sheep. In the spring of 2013, Tomales Farmstead began making its first cheeses.

Kenne (pronounced “kennay”) is a farmstead cheese made entirely from goat’s milk – the word “kenne” is the term the area’s early inhabitants, the Miwoks, used for “one.” It has a dense, creamy texture and a delicate wrinkly rind, which are meant to conjure the Italian soft-ripened cheese La Tur, a favorite of the family’s. The high quality of the milk is perfectly showcased in the paste’s mild, slightly earthy flavors.