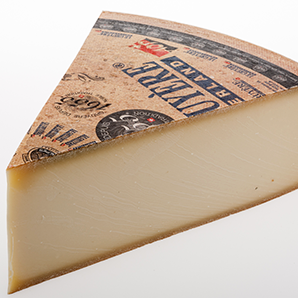 Fromagerie Le Cret is located near Gruyere’s namesake village in the Canton of Fribourg, Switzerland. Cheesemaker Jean-Marie Dunand goes to great lengths to maintain high standards -- using only his most exceptional milk, making about half as much cheese as his quota would allow, and constantly refining his process. The result is a dairy that is a frequent recipient of the Gruyere Association's Medaille d’Or, an award presented to dairies with the highest evaluations every month for five years.

Aged by a local affineur that has been in business since 1915, Gruyere 1655 is marked by a fresh cream blast, a bright fruity flavor and a deep, structured nuttiness. The paste is light mocha in color and studded with pinpoint crystals.