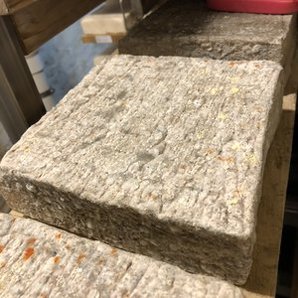 Located in converted brewery tunnels beneath the bustling urban landscape of Crown Heights, Brooklyn, Crown Finish Caves is a facility dedicated to affinage. Rather than make cheese, Crown Finish receives young, often rindless cheeses from artisan producers in both the U.S. and Europe, and cares for them until they are ready to be sold. The tunnels maintain a year-round temperature of about 50 degrees, which is ideal for cheese maturation.

Crown Finish's only imported cheese, Bufarolo, is made from buffalo milk at the Gritti Family Farm in Bergamo, Italy. Over the course of its time aging in Brooklyn, Bufarolo develops a silvery natural rind, and a fudgy, silky paste. The rind's mushroomy earthiness offers a wonderful contrast to the bright, lemony, decadent interior.

Crown Finish also offers a version of Bufarolo that is washed with beer from Transmitter Brewing Farmhouse Ales. The washed version develops a thin, orange rind with notes of yeast and less earthiness from the cave.